Jimi Tenor: Out Of Nowhere 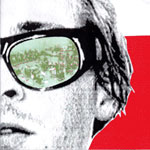 Yes, quite. Mr Tenor has a remarkable ability to come at you from unexpected directions. For this album he’s joined forces with the Orchestra of the Great Theatre of Lodz, Poland, as well as a pool of talented session musicians, to put his madcap visions into sound. Clearly they are endowed with telepathic abilities: Jimi has never been better complemented, as all involved nail down a distinctive and soulful vibe. “Spell” shows that Jimi’s done his disco homework; those classic upfront strings and brass are perfectly reproduced, while Jimi—with typical gusto—aims, and nearly achieves, the Barry White bedroom rumble among candidly sexy lyrics. Elsewhere, the influences are more subtly used: while “Better than Ever” has the sound of laidback soul, the mood is deeply unsettled—turmoil under a facade of seduction. Mid-album highlight “Blood on Borscht” turns on traditional rock aggression with gnarly Led Zep guitars, then steadily increases it to psychotic intensity as layers of bleeps, brass, strings, choir, distorted vocal noises, xylophone and gong power into the mix. Film springs to mind for the title track (a gladiatorial battle?) and “Night in Loimaa” (space opera?), which both leap through the same abrupt action-driven tangents as a genuine soundtrack.

While Tenor in conceptual mode gets it just right, some more traditional cuts don’t quite come off. “Backbone of Night” could be Air were it not for Tenor’s piercing lyrics; “Call of the Wild” has everything there, but without the orchestra of before (owing, sadly, to time restrictions) it misses the target. (Although is that a sample of Seefeel’s “Air Eyes” in the intro?) Potential purchasers: bear in mind that, if you have an aversion to film flourishes or retro soul, you will almost certainly not like this album. Actually, if you do, Jimi Tenor is not your man. For all the technological mechanics he employs, his heart is still in the discos and cinemas of 1977. Where next for him? A musical, maybe. Now that—how about it, Jimi?—really would be something.