Jesse Saunders: “On and On” 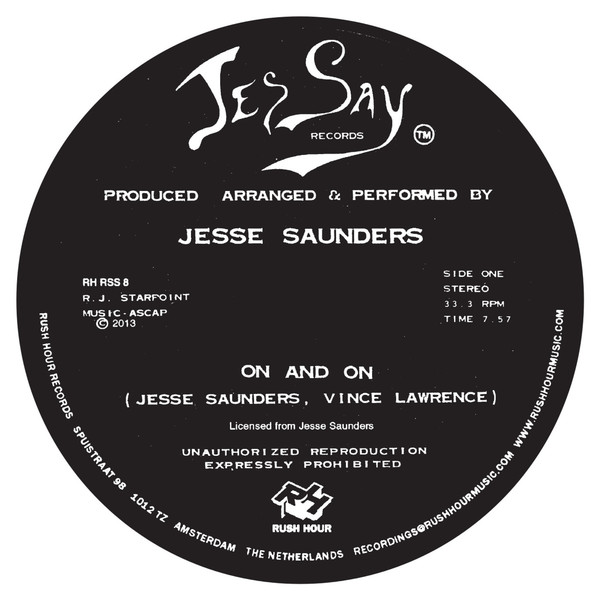 In the history of Chicago house music, there are three important early singles. Jesse Saunders’ “On and On” (Jan 1984) was the first self-published release, showing young people they could make their own records. Chip E’s Jack Trax (July 1985) established a unique sound for house and its offspring, techno. J.M. Silk’s “Music Is the Key” (Aug 1985) was the first national hit, attracting major-label attention and opening the floodgates for nearly a hundred records the following year.

Famously, Jesse based his A-side on a white label medley thought to have originated from Miami, but it was the beat tracks on the B-side that received the most play. This was the era of DJ tools, beginning with Jive Rhythm Trax (1982) and spreading to Europe’s Faces Drums and Mix Your Own Stars. Jesse’s rhythms are simple yet effective. Based on surviving recordings, DJs like Ron Hardy sometimes played them raw—not even mixing in a cappellas or other songs. This was evidently the source of the stripped-down style we now associate with underground dance music.*

Apparently only 500 copies of the original black label record were pressed, though it’s unclear how many white label ones were printed. In recent years I’ve seen copies as low as $50 at retail in Chicago. Nevertheless, I applaud Rush Hour’s efforts to remaster and spotlight this release. It is, after all, where house music began.

* If the date on Deep House Page mix 735 is to believed, Hardy may have been playing Farley’s “Funkin with the Drums” from tape in December 1983.