Gas at the Chicago Cultural Center 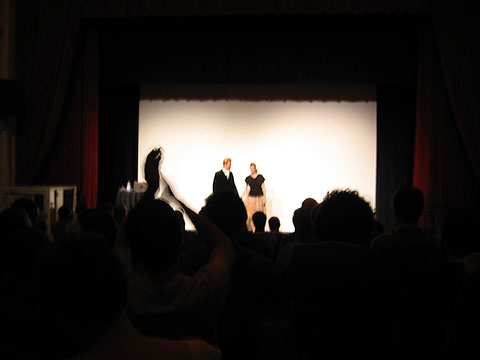 Gas played a beautiful, free, two-hour set at the Chicago Cultural Center last night. The space was a small, packed theater on the second floor. (Some attendees had to move to an overflow room.) It was pouring rain outside. Wolfgang Voigt emerged after the lights were lowered.

The Gas sound is unique with layers of mysteriously stretched orchestral samples. At times the music was muffled, bass-heavy, and beatless. Sometimes strings or horns would strike out or a huge, fast kick drum would descend.

The sound and video were perfectly intertwined. At one point a kaleidoscope of fragmented shapes moved into formation. Grid overlays formed pixels of glimpsed movement. At times I felt like I was moving through a three-dimensional sculpture.

At the end, stroboscopic colors were so intense some audience members covered their eyes as the dark, alien music surged. It was a dramatic finale to an indescribably powerful experience.