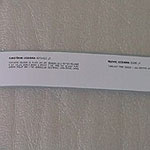 I truly believe that Funkstörung and Plaid are the best remixers in the electronic music biz. I’ve yet to see a collection of Plaid’s masterpieces, but the boys of Funkstörung have just released their second compilation. Although it’s not as solid as Additional Productions, there are some nice tracks. Highlights include A Guy Called Gerald’s “Humanity,” with jazzy percussion that enhances Louise Rhodes’ low-key vocals. Speedy J’s “Something for Your Mind” undergoes some brutal vocal butchering. Funkstörung quite lovingly made this one as grating as possible while staying true to its old-school roots. Similarly, “N.C.R.” by Ike Yard sounds like Funkstörung remixed it the year of its release (1982), with choppy vocals Prefuse 73 would be proud of. Finally, Tocotronic’s “Morgen Wird Wie Heute Sein” is wonderfully melodic and orchestral. I’m left wanting more.

Although there are some great tracks here, I feel like Funkstörung’s starting to re-use sounds and effects. I hope their style evolves a bit more by their third remix comp. And as much as I love pretentious packaging, woe to the collector who actually stores her copy of the Vice Versa CD in its cardboard slipcase and has to carefully remove it from its tight, stretchy styrofoam sleeve every time he or she wants a listen.