An Interview with Don Funcken 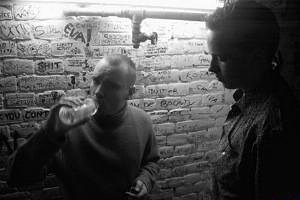 The Funcken brothers, Don and Roel, are busy guys. From Funckarma to Shadow Huntaz, from electronica to hip-hop, their records span genres and continents. Despite his hectic schedule, Don was kind enough to grant Gridface an email interview.

Jacob: How old are you and Roel? When did you start making music?
Don: 28 and 32. I started mixing and tape dubbing at about 12 years. Roel did the same a few years later. Roel was youngest finalist of the Dutch mixing championships at the age of 13…. I bought an Amiga game computer at the age of 16 to do the first “real” production steps, making hip-hop and early drum and bass kinda stuff.

Your music is a unique blend of electronic and hip-hop aesthetics. Who are some of your influences?
Well, hip-hop (besides early ’70s-’80s disco, funk, and soul) was our first real grip on music. We started with all the old-school stuff: Kurtis Blow, Fat Boys, BDP, all the old electro records and boxes (Jonzun Crew, Captain Rock, etc.) and stayed in hip-hop for many years (Public E, Eric B, Paris, Kid ‘N Play, Jvc Force, 45 King, EPMD).

[Then we grew into] breakbeat, D&B in the late ’80s, early ’90s. We know all the old UK rave and breakbeat stuff—you name it, we have it. We moved over into house (early Rising High, Harthouse), hip house stuff (Fast Eddie, Tyree, etc.), even nasty club and shit. But the DJing was always an eclectic mix of house, breakbeats, club, hip-hop at 45 RPM (!), and even dub.

Besides the house influence there was that ear for other early different stuff (The Orb, FSOL [Future Sound of London], first Ae [Autechre] stuff) ’cause when house was growing in Holland, at the beginning of the ’90s there was always space for chill-out parties and stuff, and we found out that “that other music” was so far more advanced technically, more industrial, and most of all more individual than all the dance stuff we did besides that.

House bored us pretty quick, and now we pretty much hate it in general (although some great tunes pass by now and then). Electronics we followed from the beginning, but less the last two years, ’cause the magic seems to be gone for us…. Most stuff sounds too familiar or like we’ve heard it before, although people like Aphex Twin, Ae, The Orb, FSOL, most Warp and Rephlex shit, Isophlux, etc. remain the biggest influence and still seem to have that magic that we miss often nowadays. But hip-hop is something that completely got our attention again for the last four, five years, and then in particular the raw stuff. And thanks to the meetings with Shadow Huntaz we could test our skills making hip-hop in our vision.

I understand you’ve had formal studies in audio and visual work. What did you study?
Roel studied sonology (the process of sound and its factors) at an academy for six years, so he is pretty trained when it comes to sound (the whats, hows and whys).

I did a study in making programs for radio and TV (as a director), plus I was always pretty quick with technique and hard and software.

Who are some of your favorite visual artists?
Well we started having interest in the past two years on that actually, ’cause it’s not really our thing (although I studied for the shit I can’t do it all).

The one who opened our eyes was Meam (Skam) who makes by far some of the best abstract, organic, colorful stuff we have seen. People like [Chris] Cunningham are heroes to us too, but we started working with a young guy from Holland recently—his name is Michel De Klein, and I’m telling the world to watch out, ’cause this man is a genius… un-fukkin’ believable and so eager and fast-developing. He’s working with us on a project we’re doing with other musicians, named Dif:use, plus he did a video for one of our latest tracks. Next plan is to make a full DVD with him sometime next year. I think he is a good match for Meam, but definitely his own style (does his own 3D modelling, etc.). By the way, Meam is working on a video clip for Shadow Huntaz, available later this year.

How did the Shadow Huntaz project come about? Did the MCs seek you out?
Nope, we were in NY and heard the Plug Research record of them at Shad T. Scott’s house (Isophlux) and we were devastated by the MCs, ’cause the record had such impact. Shad knows Allen of PR, and so we asked Allen if we could get the vocals for a remix (for Plug). It took a while, but we got them, some friends we asked did a remix too, so I offered Allen nine different remixes of that Shadow track, the MCs heard the remixes, and one thing led to another…. We started working carefully with a new track, via filesharing software, ’cause MC Non is always online, so that was pretty easy. I asked Non to give us the benefit of the doubt, and he did. We made like 30-40 tracks in two years and started working on a deal.

Is it difficult doing long-distance collaborative work?
Well in general not, ’cause as I said, Non is always there, works fast and accurate and is very flexible. The problem sometimes is getting raps off the other two MCs, ’cause they don’t have recording capabilities, and one of them not even Internet [access], so work’s pretty slow.

On the other hand, this is the only way the process could have happened, ’cause with four or five men a studio doesn’t work. We are loners pretty much.

Is there a big music scene in Holland? How has your work been received locally?
There is a big scene yes, only not concerning our stuff. We start to get around the world, but Holland neglects us ’cause they can’t define us. First we do electronics, then it is rap, then it is acid stuff. Plus this country is full of people who enjoy mass monotonous trance and other crap so we don’t have a real big following over here. As long as we don’t do 4-on-the-floor stuff, it will take us a long time to get some recognition. But we’d rather make good stuff we can listen to than get recognition by the masses and hate ourselves and our music. We will see what the future brings.

What projects are you currently working on?
Well, the new Shadow Huntaz is being finished (full-length) for Skam again. We just did an instrumental version of the first Shadow Huntaz album that will be out soon on Skam. We will do a solo album for one of the MCs as well before the end of the year.

We are working on a new Funckarma album, ’cause that’s been too long as well. Plus next year a Funckarma DVD. There is some Cane stuff coming out on Colony Records UK, a new Cane on Warp, and we need to check for some more labels to do some Cane (acid/electro kinda thing, but in our way).

We did an instrumental project called Juan, with horns, guitars, and stuff. We still need to decide where to release that. Personally I think it’s one of the better things we’ve done lately.

We did enough tracks for a full-length with our man Kettel from Holland. We are working on a full-length with only Dutch MCs, in Dutch, obviously. Dif:use is a side project with people like Kettel, Static (City-Centre-Offices), EOG/Alden Tyrell, Cor Bolten (a film musician) and the VJ Michel de Klein. And this is a big live jam interaction between sound and visuals. We will work on a DVD for the future.

We finished remixes for Semisexual (Mr. Projectile), Comtron (Bastian), Merck (Blamstrain), Angelmaker Records (RA-X), M-tron (Duuster), but I think we will stop doing remixes ’cause all the labels take ages (read years) to release stuff, and we don’t like putting out old stuff, so consider this is a warning….

What are your plans for the future?
Stay healthy, see if there is a way that we can reach more people than we reach now, and see if we can make a small living out of this business. Otherwise we need to start making trance music… hehe.