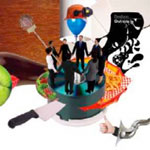 Freeform’s last EP, Wildcat, seemed disjointed and bizarre, but on Outside In his new style is starting to gel. As usual, Simon Pyke’s music is very natural-sounding, from the guitar-based folktronica of “Wild Stew” to the funky, meandering electronics of “Taking Me Over.” On some cuts, Pyke’s murmured singing seems out of place. On “This Is Your Life,” for example, an echoey beat and lovely bassline are almost drowned out by slow-building layers of whiney voices. (The effect reminds me of Aphex’s Richard D. James album.) Likewise, on the brief “Eating Weather,” nasal kazooing distracts from a familiar-sounding Chicago house track.

On other cuts, Pyke’s vocals work. On “Follow Your Shadow,” his tentative falsetto adds to an eerie atmosphere of uptempo beats and wavery theremin. Pyke repeats the same verse four times like a ghost story, singing, “Go up the stairs…. When you step into the mirror/you’re in a feedback of time.” Also of interest is the tribal “Carnival,” which sounds similar to “Rattle” from Human. Both have crowd noise and lots of drumming.

Pyke’s newest releases are nowhere near as stunning as Human, but I think I know where’s he’s going again. I hope he spends some time honing his lyrics.