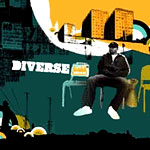 I’ve already covered a couple of the singles from this album: “Explosive” and “Certified.” But this LP is amazingly cohesive—there’s not a single weak cut. Diverse’s lyrics flow over some of the tightest production this side of Pete Rock, courtesy of RJD2 and Prefuse-73, among others. Stand-out tracks include the funky, sample-filled “Big Game,” featuring Vast Aire, the soulful “Explosive” B-side “Aint Right,” the smooth downtempo “Jus Biz” produced by Prefuse-73, and a jazzy bonus cut. While mainstream hip-hop gets further and further from its roots, pushing bling bling-studded MCs with single-syllable vocabularies, Chocolate Industries presents an underground alternative where the rhymes still rule and producers combine diverse elements into a complex weave.