Hart Plaza was noticeably more crowded today. The sun came out after a downpour around noon. I arrived in time to catch the end of a tag-team DJ set by Audion and Ryan Elliot. They played their brand of stripped-down compressed techno, then some Larry Heard and Moodymann. It was all very smooth, though they mixed in and out of things quickly. I probably would have enjoyed the music more if I hadn’t been getting a weird frat-boy vibe from the crowd. 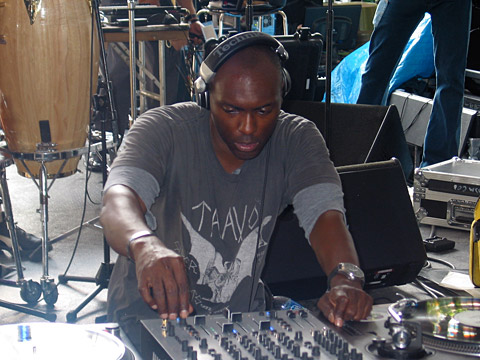 The Ghostly guys were followed by Kenny Larkin, who showed remarkable patience untangling a mess of patch cables they left. If Audion and Elliot’s set was a collection of short stories, Larkin’s was an entire novel. He truly told a story with his records for an epic, fiery couple of hours. A percussionist occasionally accompanied on bongos, which was fun, but Larkin would have rocked the floor even without him. Larkin played a lot of his own tracks, including Dark Comedy ones. He also broke out Lil Louis, Donna Summer (“I Feel Love,” which he must have), and even Basic Channel. At one point he manipulated the turntable to turn a James Brown sample into a painful groan.

Next up Blake Baxter presented Abe Duque, who played live sample-filled ghetto house on a tableful of equipment. Unfortunately, I wasn’t able to hear him out, since dinner was calling.

At the main stage, Hardfloor overstayed their welcome, at least for me, though the crowd seemed really into them. Much of what they played was simple, trancey rave acid. I was afraid they were going to blow the speakers at one point; earplugs were a definite requirement. It was a trip to see hundreds of people rocking out to “Circus Bells,” though no mention was made of Robert Armani. 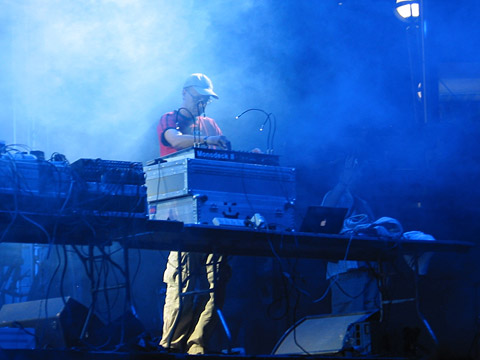 Finally, Monolake was allowed to position the gooseneck lamps on his Monodeck II. He danced around with a smile and a cigarette. It took a while for him to get a feel for the PA, but almost an hour into his performance he broke out some gut-quaking organic sounds. Textures blended and morphed, building subtle atmosphere over the beats, which clocked in at respectable BPMs but lent themselves to slow dancing. The low-key stage lights and darkened skyline all contributed to a surprisingly dark, eerie feel though the amphitheater was quite crowded. One track I’d never heard before was downright electro with a pumping bassline and chordish voices. Mainly, it was more dubby stuff, heavy on ping-pong reverb. 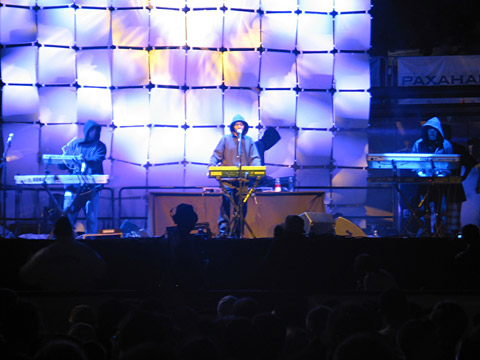 Juan Atkins also started late, but he was without a doubt the headliner. He and two fellow synth players blasted Model 500 classics, as well as some tracks from his other aliases. Cybotron’s “Clear” was a crowd-pleaser, but Infiniti’s “Game One” turned the plaza into a church of techno with raucous gospel organ. It was an amazing experience. Unfortunately, Juan’s performance was all too short, shutting down promptly at midnight as required by law, many hits left unplayed. I can’t complain, having just seen the inventor of techno play “Technicolor.” Tomorrow promises to be an even busier night.