Chris Clark: Empty the Bones of You 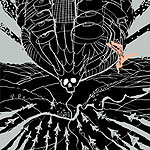 This is an album I’ve been living with for a couple of months now, and it continues to grow on me. Clark offers a darker take on the usual Warp complexity. On the opening track, “Indigo Optimus,” a brooding melody swirls among swooping electronics, squeals of feedback, and glitchy beats. “Holiday as Brutality” is slightly more lo-fi. The analogue synths are reminiscent of Boards of Canada, but Clark focuses on dissolving and recombining the layers. Surprisingly, the title track is an atmospheric, noisy interlude. “Early Moss” has more going for it, with a beat that could be early AFX. Another highlight is the bizarre “Slow Spines,” with whistle-like sounds over eerie glissandos. Eventually a hip-hop beat kicks in. “Umbilical Hut” and “Farewell Track” play with reverb and clipping, with notes and chords softly dissolving into white noise. Clark basks in the warmth of distortion with these two—think of old recordings played on a broken speaker.

Although it’s easy to make comparisons between Warp artists, Clark has a distinctive sound. While his tracks are short, they’re crammed full of intricate details. Snippets of melody intermingle with levels of texture. Amidst sounds of breaking machinery are carefully crafted interactions. It’s as if these melodies are emergent properties, rising from the depths of their algorithmic components.