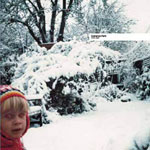 Never before (with the possible exception of Autechre’s geological-time Chiastic Slide) has electronic music sounded so old. Chris Clark’s debut on Warp sounds like the product of a world where neanderthals had access to synthesisers: violent, unrestrained and entirely free of subtlety. Grinding slabs of noise, raw octave-leaping buzz leads and club-to-death rhythms are chopped mercilessly into Aphexian arrangements. Even the more ambient cuts seem to swim through the primordial soup: “Fossil Paste” and “Caveman Lament” are convincing evocations of prehistoric vistas, and “Shrewland” brims with fizzing menace. With such aural savagery taking place, it’s unsurprising that the album clocks in a touch under 32 minutes. It’s also unsurprising that Clark attempts some more modern cuts to alleviate it. Unfortunately, the closer Clark gets to the present day, the less convincing he sounds. “Pleen 1930,” “Oaklands,” and “EmW” are reasonable counterfeit Enos, but at no more than a minute thirty each are too insubstantial to enjoy. “Lord of the Dance”—the present day—is the definite low-point: apparently an attempt to parody something or other (hip-hop?) through plasticised beats and vomit-inducingly twee flute, it emerges neither funny nor interesting. But it is a rare moment of disparity from Clark’s neatly-realized vision of keyed-up cavemen, which (although Warp is asking a lot for a half-hour of music) is probably worth sharing.