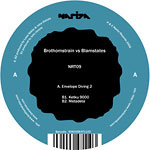 Finland’s Brothomstates, probably best known for his 2001 release on Warp Records, teams with Juho Hietala on this sweet new 12-inch. “Envelope Diving 2” is eleven minutes of minimal bliss, with ticks and dribbles over a hard beat. The sounds slowly build to a reverberating peak. “Ketku” on the B side is a more club-friendly track. It has a tech-house beat which gains a thunderous bassline and 303 acid bleeps. “Metadata” is darker and sparser. A simple synth line and bird-chirp squeaks chug along a retro beat. It doesn’t have quite the same impact as the first two tracks. This truly fits Narita’s slogan, “putting the D back in IDM”!