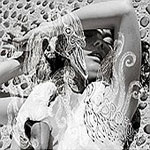 I’m a pretty big Björk fan, so I picked up Vespertine right after its release. Nonetheless, it’s taken a couple of weeks of listening for me to form an opinion on it. Like Björk’s other releases, this album is dense with layers of electronics and orchestration. Her distinctive voice warbles out beautiful vocals ranging from fragile whispers to strong, soaring song. Sometimes the relationship between vocals and instrumentation is difficult to discern until you’ve heard the track a few times. Although I don’t find this album as cohesive as the masterpiece Homogenic, I’m really enjoying spinning it in between more abstract electronica. Björk’s genius isn’t just her singing and songwriting—she’s a master collaborator. She brings together artists as diverse as Matmos, Matthew Herbert, Zeena Parkings, and Guy Sigsworth and produces exquisitely crafted beauty with them all.