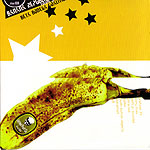 On this split EP, the Coalition’s collaborators are better defined than on previous releases. Prefuse 73 & V8 contribute a solid groove which has been out on vinyl for a while. Once again, Herren cuts to the heart of hip-hop aesthetics, while clips about Central American politics bubble in the background. A second highlight is Push Button Object’s jazzy instrumental for another V8 report, “Transmito.00174.”

On the flip side, so to speak, Brundel’s slick hip-hop compositions raise awareness of slavery in the harvesting of beans for coffee and chocolate. Basslines bustle over beats, and contemplative melodies accompany the instrumental tracks. On “Agua Mama,” Spanish rhymes flow over guitar and organ. Only Otto “El Santo” Von Schirach’s grating remix seems out of place.

Although Beta Bodega’s releases are often overlooked by the press, they’re as important musically as they are politically. Perhaps it would help if the label was a little less mysterious.