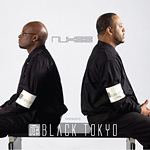 “Reel to Real” and “Dragon Fly” are my least favorite tracks. Over-exuberant synth stabs on the former and rave-style vocals on the latter are apparently tailored to a type of club I avoid. I find “Kyoto Station” charming, however, perhaps because I’ve actually been there. I wish there were an instrumental version of “Winter in Japan.” The synth parts are beautiful. “Tokyo Telacom” [sic] is what the title track should have been. The vocoder parts work well with the subject matter.

I admire Aux 88 for their longevity and for their willingness to experiment. This is a diverse album. While I may not like certain cuts, there’s something for everyone with an interest in Detroit techno and electro. The final track proper, “Shadow Dancing,” even has a dub techno flavor. I would love to see a live show with this material.