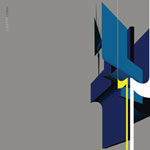 The new Ae album is harsh. After three listens, I’m still not sure I understand it. For me, LP 5 was the high-point of Autechre’s glitchy, complexity-based style. Back then they were experts at slipping melodies into unexpected places. Here the emphasis is percussion loops and stutters, and it takes a while for traditional musical elements to emerge. On the opening track, “LCC,” cheesy staticky beats slap around for the first half, then a bassline and half-melody appear. Likewise on “Impacial Section,” rattling ticks sound almost random until notes emerge and begin to interact. The track breaks down into oscillating notes, then muffled voices, then blurps. It’s an odd progression that seems like three or four combined compositions.

Many of these tracks seem disjointed. “Augmatic Disport,” for example, starts noisy and percussive, then transforms into light snares and Miami Bass-like thumps at the end. Like all Autechre albums, I’m sure this one will grow on me over time. It usually takes repeated listens to sort through the complexity and recognize the most interesting parts. Still, it’s been a while since an Autechre release has struck me as spectacular. I wonder if the stark algorithmic programming they’re pursuing is just too academic.